Hello and welcome to our look back at the latest episode of RuPaul’s Drag Race.

In the grand tradition of season 6’s Shade: The Rusical, season 7’s “Divine Inspiration” tribute to John Waters and season 10’s Cher: The Unauthorized Rusical, the season 12 queens are tasked with putting together a musical tribute to the Queen of Pop, Madonna.  The show has devoted some time to celebrating Madge, although the resulting runway (in season 8) ended up being the “night of 1,000 kimonos.”

This time, Madonna gets the full Rusical treatment, the queens casting themselves as the many incarnations of the Material Girl. In addition, the runway challenge had the queens serving their favorite Michelle Visage looks. There was the usual drama and tears and oodles of charisma, uniqueness, nerve and talent. Let’s take a look at the top moments from the episode.

While Heidi has been bringing the laughs to the confessionals, this week, Widow takes over and serves some zingers. She kicks off the episode stating that “you can taste the fakeness in the air” as Brita does a complete 180 on her feelings towards Aiden. And, as the post-Untucked apologies were flying (Gigi apologized to Heidi for telling her to step up her makeup, Jackie apologizing for kicking the other queens when they were down), Widow coined a great new word, and said the queens needed to stop with the “apolo-lies.” 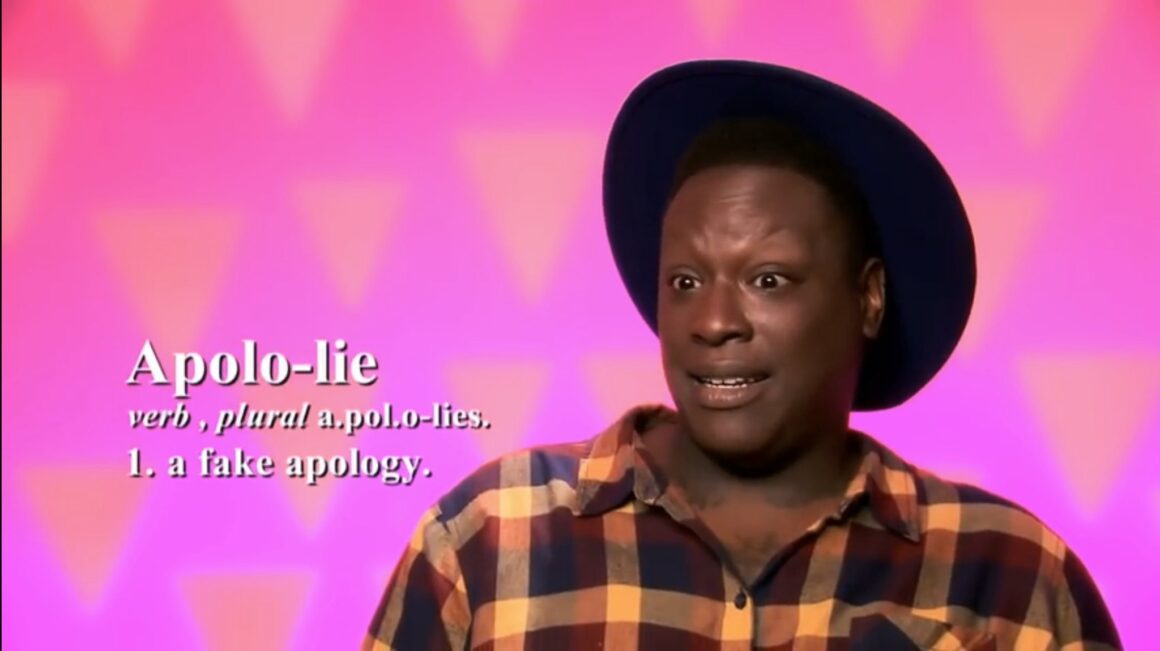 She went on to say that, the next day, when the queens returned to the werk room, that you could cut the tension with a “cold-ass butter knife.” She continued to spit wisdom throughout the episode and I’m so loving her right now.

Causing a Commotion in the Studio

The queens record their Rusical vocals with “ the world’s foremost Madonna expert” – Michelle Visage (of course) and songwriter/producers Erik Paparozzi and David Benjamin Steinberg. (So glad they’re not lip-syncing to a track.) While Jan (not surprisingly) knocks it out of the park as early Madonna, some of the other queens don’t fare so well.


The Week in Drag – the Vivienne Takes Over Hollywood, Nina…


World of Wonder Encourages You to “Stay the F***Home” with…

Widow wonders out loud why they all let Jan go first, as now, “the rest of us non-singing bitches have to follow that shit.” Jaida, who has pretty much oozed sex appeal since she walked through the door, has a hard time bringing the seductive, breathy vocals that Sex book/Erotica-era Madonna delivered, leading Heidi to think that maybe Jaida is not the “trade of the season.” Jackie also has a hard time nailing “like a Virgin” era Madonna, coming off more like Madonna as a Disney Channel star. Oof.

Crystal manages to crack everyone up with her sad, sad vocals. Brita also takes notes from Michelle and sounds pretty decent as “Express Yourself” Madonna. Gigi is told she’s giving too much Patti LuPone, which would have been a good note if she had any idea of who Patti LuPone is. Gigi is visibly flustered as she tries to work through her lyrics. Uh-oh.

Getting Into the Groove

The queens meet with famed choreographer Jamal Sims to learn their steps. Widow busted her knee during the first challenge, which led to Jamal switching things up to accommodate her injury. Again, Jan nails her routine, but Jackie has a hard time bringing the sexy, coming off more “robotic.” Gigi also has problems recreating Madonna’s “chug” moves from the “Papa Don’t Preach” video.  Brita’s take on the Roger Rabbit generates giggles from her castmates.


The Week in Drag – Season 12 Recaps from Your Favorite…

While they were getting ready in the werk room, the conversation went to Madonna’s support for the LGBTQ community and her AIDS work. Heidi talked about growing up with a gay uncle, who died as a result of HIV when she was a kid. She said her uncle made her felt like she belonged and really misses him, especially because he passed about the time that Heidi started getting bullied at school. She went on to say that she didn’t have a good relationship with her father, which led to a discussion about Crystal’s dad.

She says her pop is supportive of her career and even helped find props for her performances. Sadly, he was diagnosed with Parkinson’s a few years back and Crystal said it’s hard to watch him lose mobility and deteriorate from the disease because he is her “superhero” and she wants to make him proud. I am sure she does every day.

Sending so much love and support to you and your family, @CrystalMethyd. ❤️ #DragRace pic.twitter.com/ajDHSTi5P9

When Ru hit the runway, looking stunning in a red and black dominatrix-inspired look., complete with riding crop, black opera length gloves, over-the-knee boots and platinum hair for days, she asked Michelle to address the rumor that Madonna sent her a cease and desist letter. Michelle said there was no letter, but that Madonna’s people called Michelle’s label when she was in the group Seduction, and said, “if your girl is going to try to steal Madonna’s look, the least she can do is do it well.” Ouch.

I didn’t have overly high hopes for this musical, but it made up for last week’s weak Snatch Game. Jan kicked off things as Early Madonna and nailed the “Borderline” look, the vocals and the choreography. Jackie was still a little too bubblegum as Boy Toy Madonna but nailed the “Like a Virgin”/MTV Music Award wedding dress look. She was all nerves in rehearsal, but Gigi was fantastic as Unapologetic Madonna, serving a “Papa Don’t Preach” video look and giving us flips, lifts and an effortless “chug.”

Brita really can’t dance, can she? Her vocals also weren’t as strong as I thought they’d be, but she looked cute as Cone Bra/”Express Yourself” Madonna. Jaida nailed the sexy Madonna and Sherry was fine as Evita-era Madonna. Crystal brought her “hippy-dippy” personality to “Ray of Light” Enlightened Madonna, Widow gave us fierce moves and “Music” as “Fempire” Madonna and Heidi gave us an energetic take on the current, “Bitch, I’m” Madonna. All in all, it was pretty epic – and I think Madonna would definitely approve.

Strike a pose, there’s nothing to it 💋

It’s the world premiere of Madonna: The Unauthorized Rusical! ✨ #DragRace


The Week in Drag – DragCon LA Canceled, the Queens Weigh in…

When Ru announced the category for this week’s runway, I was dreading another redux of the Madonna runway, where most of the queens wore the same look – a kimono. I feared everyone was going to go for big hair/big boobs. Straight outta Jersey Michelle, but the queens brought a surprisingly varied array of looks to the main stage.

Jan did Michelle’s look from “Glamazonian Airways” and it was perfect from the hair to the boobs. Jackie wore one of Michelle’s All-Stars looks and gave us boobs and big hair “straight from the Garden Place Mall”.  Gigi served us Michelle’s poolside look from Soul System’s “Lovely Day” video Michelle and looked absolutely dazzling, as usual, with blonde locks and crazy long nails. Brita wore the classic blue velvet gown from the season 10 finale and Jaida rocked Michelle’s All-Stars “icon” with spiky accents and (of course) boobs.

Sherry Pie perfectly replicated Michelle’s look (and “choreography”) in what is still my favorite ever video from the show, “Kitty Girl” and  Crystal gave us 1996 “Lady in Red” from Ru’s old VH1 show. Red is definitely her color. Widow also took us back to the 90s with her take on “Starry Starry Michelle” looking like a cross between a super hero and Ginger Spice. Heidi gave us Michelle on the set of The Only Way is Essex. Heidi said her huge top bun was filled with “hairspray and desperation.”

“You are right exactly as you are.”


The Week in Drag – Season 12 Recaps from Your Favorite…

New York House representative Alexandria Ocasio-Cortez looked lovely in a sequined dress and said it was a dream come true to be on the judges’ panel – and she turned out to be a fine judge (as was beautiful model Winnie Harlow). She complemented Crystal on her “hairography”, so we know she is up on her Drag Race lingo. She also shared a touching moment with Jackie where she encouraged her to “share you with us.” Jackie thanked her for working along with Muslim politicians and said it gave her so much hope because her mother emigrated from Iran and faced people telling her to go back where she came from and had to hide her heritage for so long.

“You are right exactly as you are.”

I can already predict how next week’s episode is going to begin. From the beginning of this season, (Just) Jan has been touting herself as a musical theater star and, while she’s turned in some impressive vocals in the past, she is still sort of flying under the radar.

When this week’s challenge was announced it was pretty much Jan’s to win, but Gigi prevailed, and Jan was very visibly upset.  She walked veeeerrrryyyy slowly to the back of the stage and Widow described her face as, “You know in scary movies when the villain like snaps and starts tearing faces off…?” Yes, very that. I predict the first five minutes of next week’s episode are going to involve some sort of intense Jan vs. Gigi discussion.

Our two weakest material girls this week are Brita and Heidi, and they lip sync to one of Madonna’s best songs (IMHO), “Burning Up.” I’m so glad there’s a song that gives the queens a  chance to deliver a little more movement. They both give us some moves – Brita was really trying to sell it, but I couldn’t take my eyes off of Heidi. (AOC was me, lip syncing along with the queens.) And, sadly, it’s the Queen of New York’s time to sashay away.  I have heard nothing but good things about Brita, and I look forward to seeing more from her.

And that drops the curtain on Drag Race for this week. Until we meet again, stay safe, stay healthy, stay fierce and if you can’t love yourself…you know the rest.